Saving her team and their families — Dr Ellen Nelson

Saving her team and their families — Dr Ellen Nelson

Dr Ellen Nelson and her team spent 10 months to get her former Afghan team members and their families out of Afghanistan after the country had fallen.

Ellen joined the New Zealand Army in 2003 as an Engineer, 2 Engineer Regiment and primarily served with the Construction Troop.

She served in Afghanistan, CRIB 17, between 2010 and 2011, as the Engineer commander and her team included 5 kiwi soldiers and 15 locally employed civilians (LECs). Their role was to maintain infrastructure on New Zealand bases and to manage construction projects in the community. She was very proud of her team.

“It was a highlight of my career. They were great people — we were an absolute A-team. We hung out together, worked together, and the locals were a big part of it. They all made it into my heart.” After the Taliban came to power, Afghans that had worked in defence or security for the previous Government and with any of the coalition forces were in grave danger.

The Government and NZDF had evacuated Afghan civilians, but those flights were suspended by the bombing of Kabul Airport.

All of the people who had worked with the NZDF, around 60 LECs, were still in Afghanistan. Ellen agreed to help, but the barriers were immense.

“While the Ministry of Foreign Affairs and Trade had committed to support these people, there was no clear pathway to get these people out. All existing policies and procedures didn’t work for these people. They had no internet, no passports, no money, and MFAT didn’t have anyone on the ground.”

The first step was to sort out the paperwork for the families. Ellen and her interpreter friends spent many weeks, working until 2 or 3am, night after night, meticulously compiling identification documents and all the paperwork for each of the LECs and for each member of their family.

“Compiling documents from people who are on the other side of the world, who don’t speak English, have no access to internet, and were in hiding was a tricky task”.

The aim was to get the 60 LECs and their families out of Afghanistan.

It was common for these families to have 5, 6 and 7 kids, so this totalled several hundred people. Of all the people that Ellen was hoping to bring out, two thirds were children. 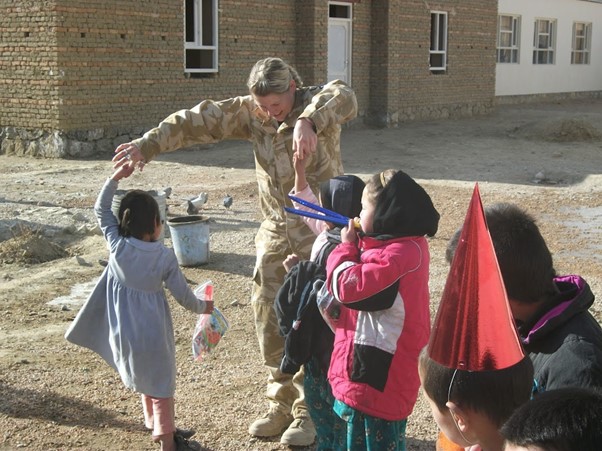 By September 2021 she had managed to get all the NZ visas. Unfortunately, the how was unclear and the project was on a knife-edge.

Then, in what Ellen describes as a “Magical week”, a team formed around her, a team that could get those families out.

Chris Parsons (former Deputy Chief of the NZ Army and former Commanding Officer of SAS), Martin Dransfield, a serving officer, and one other veteran, contacted Ellen and offered their support. They brought experience and connections, they also delivered the ‘how’ and hope, and the four became a tight-knit team.

Following some media coverage of Ellen’s team’s efforts to help the LECs, the Minister of Foreign Affairs, Hon. Nanaia Mahuta agreed to collaborate with Ellen and her team, to develop a plan to evacuate the LECs from Afghanistan.

Through October 2021 to May 2022, the team regularly met with MFAT, contributing their experience, connections and skills.

The team was supported by many more people; the media, other volunteer advocates, several critical Afghan interpreters, and of course, the many dedicated Government officials.

In November 2021, the first LEC families began to leave Afghanistan. They left for another country, before flying to New Zealand.

Over the following months all the families crossed the border. The last family arrived in June 2022.

Every single person that Ellen and her team obtained NZ visas for, 563 people, were safely evacuated to NZ.

“It’s a miracle that they’re all safely in New Zealand.” Ellen cried with relief. “I don’t think I’d be the only person who felt this way. I assume that other Kiwi soldiers, especially those who worked alongside LECs, would be relieved that they are safe.”

In many ways, this had been Ellen’s second Afghanistan deployment.

“It has been hands-down the most challenging, emotionally draining and difficult task I have ever been involved with in my life. There were times when I didn’t know how it would end, but I couldn’t walk away from it. I would never have forgiven myself if one of those people died and I thought maybe I could have done more. I made a promise that I am going to do every single thing in my power and beyond to help these people.”

In July the families gathered together to honour Ellen, Chris and Martin. When she walked into the room, she was overcome. “It was overwhelming! All these little children with signs saying “Thanks Ellen for saving my life.”

She began this project for the male LECs she had worked alongside, but it was their children, particularly the girls that touched her most.

“When I saw them, especially the little girls, I had this real sense of hope for what their future has for them in New Zealand. It’s radically different to what was ahead of them in Afghanistan. Some of them were facing the prospect of being forced to marry Taliban soldiers. Now they are going to go to school, they are going to be educated if they want to, they will have a career if they want to, marry and have children with people if they want to. It was incredible.”

Dr Ellen Nelson wrote about her experience and in particular the leadership lessons of her team’s quest to save the Afghan families.