When members of the Canterbury Mounted Rifles returned to Gallipoli in 1918 to recover and bury their dead, they faced a new enemy in the form of influenza.

More than 104 years on and in the shadow of a new pandemic, the New Zealand Defence Force (NZDF) Gallipoli 2022 contingent returned to a small cemetery in Çanakkale, Turkey, to honour the lives of the eleven men from the regiment whose lives were lost — all but one to the invisible enemy.

A moving ceremony was held on Monday 18 April at Chanak Consular Cemetery, a small cemetery often overlooked by Anzac tourists who visit the Gallipoli peninsula to pay their respects to those who gave the ultimate sacrifice.

Contingent Commander Lieutenant Colonel Sheree Alexander said the ceremony was made all the more poignant given the upheaval caused by the COVID-19 pandemic over the past two years.

“To hear the stories of the men who came here to recover and bury their dead friends, only to be struck down by the flu, has hammered home the incredibly tragic and ongoing toll that pandemics can have.”

The NZDF Māori Cultural Group led the group, which included representatives from the Commonwealth War Graves Commission (CWGC) and Australia’s Department of Veterans’ Affairs (DVA), in waiata and prayer. The NZDF 2021 civilian of the year Tamara Hamiora delivered a reading during the service which spoke of the story behind two Kiwi civilian nurses who are also buried in the cemetery after they were killed in a car accident in 1965 when visiting the gravesite of one of their grandfathers, Major David Grant, who was killed in action on 25 April 1915.

Hamiora was named NZDF’s 2021 Civilian of the Year following her performance in her role as the Health Inventory Manager for the Defence Equipment Management Organisation after she effectively adapted and led her team during 2020 under the most challenging of supply chain circumstances to meet NZDF demand for PPE during the COVID-19 pandemic.

Hamiora was pleased to be there.

“We feel honoured to be able to make the journey to acknowledge their service and sacrifice and ensure their memory lives on.” 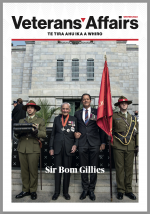