Daryl recently competed in the Invictus Games Sydney 2018 sporting a tattoo which tells the story of his struggle with injury and illness and, subsequently, mental health.

His Matatoa (Unconquered) tattoo was one of 18 art works featured in an International Veterans Art Exhibition during the Sydney Games and Daryl said seeing the photo of it on display next to the other works was humbling.

“My wife isn’t a tattoo fan but she loves the artwork, the meaning behind it, and so do my sons. That’s what counts to me,” he said.

Daryl has been with the New Zealand Defence Force for 36 years; 30 with the Army and the past six as a civilian and Reserve Force soldier.

While serving he suffered two events which would have life-long consequences: a back injury when he landed badly after jumping off a truck in Bosnia in 1995 followed by a scorpion bite in East Timor in 2001. The bite essentially made his body turn on itself, affecting his nerves and leaving him numb in his legs. Then, earlier this year, he was diagnosed with PTSD. 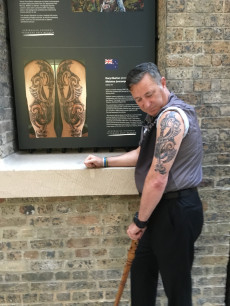 His Matatoa tattoo is part of his journey to recovery—a journey he says the Invictus Games has helped hugely with. It is a designed around the manaia and features red diamonds for his Army service, while a taiaha pushing away the demon scorpion represents his health battles. He and fellow team member Padre Darren O’Callaghan designed it.

"It’s definitely another step in my journey. That’s the reason I wanted to get it done in the first place," he said.

"It’s something I can take with me, and it’s going to be with me forever. It’s my story and that’s why it’s not a closed story—the tattoo itself isn’t closed off. There’s space there basically showing there’s room for more improvement, and that’s what it’s all about."

"It’s something I can take with me, and it’s going to be with me forever. It’s my story and that’s why it’s not a closed story— the tattoo itself isn’t closed off."