Home / News and events / Latest news and articles / The Coastwatchers of Tarawa, Kiribati

The Coastwatchers of Tarawa, Kiribati

The Coastwatchers of Tarawa, Kiribati

In October 1942, seventeen New Zealand coastwatchers on the Tarawa atoll, in the Gilbert Islands (now Kiribati) were murdered by the Japanese occupiers.

Coastwatchers were military and civilian personnel from New Zealand and the Pacific Islands. Stationed throughout the Pacific, around New Zealand and even on the Auckland Islands, most were volunteers and their role was to keep a 24-hour watch for enemy ships and aircraft.

They were an important part of the Pacific War intelligence network, and for those close to the front line, like those in the Gilbert Islands, the risk of capture was high.

Many of the Coastwatchers were telegraph operators and were or had been employed by the New Zealand Post and Telegraph Department.

Shortly after Pearl Harbour in December 1941, seven coastwatchers were captured by Japanese forces on Butaritari in the northern Gilbert Islands. They were transported to Japan as prisoners of war.

When the Japanese overran the rest of the Gilbert Islands in August and September 1942, seventeen more coastwatchers fell into their hands. These men were either Second New Zealand Expeditionary Force soldiers or civilians from the New Zealand Post and Telegraph Department.

They were imprisoned in an asylum on the islet Betio, part of the Tarawa atoll.

During the attack, one of the prisoners appears to have escaped from the asylum. He was hunted down and killed. Later that day the remaining prisoners and five other civilians (three British and two Australians) were beheaded.

At about the time of the Tarawa murders, the New Zealand Chiefs of Staff were considering whether or not to enlist the civilian coastwatchers. There was a concern that as they were engaged in military duties the Japanese might treat them, if captured in civilian clothing, as guerrilla fighters and shoot them.

However, being enlisted or otherwise did not save any of the coastwatchers that day in October 1942. The murdered New Zealand coastwatchers were posthumously mentioned in dispatches for “exemplary conduct in coastwatching and communications duties in the Gilbert Islands area in the face of the enemy, despite overwhelming odds and the knowledge that relief or escape was impossible”.

The United States Marines erected a memorial to the coastwatchers, on Betio, Tarawa in 1944, and this was replaced in 1948 by a memorial centred on a granite cross. In Wellington, a memorial to the coastwatchers, close to the NZ Post building, was unveiled in October 2014. 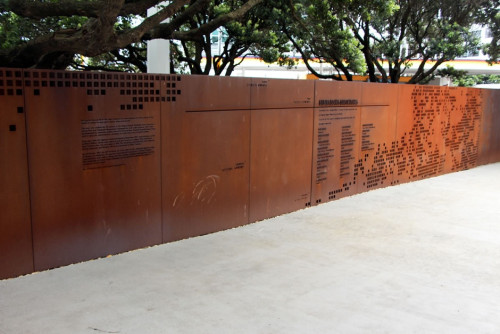